EU Views on the Refugee crisis

Refugee crisis has indeed shaken the whole Europe. And while on the field there are many CSOs, volunteers and individuals helping refugees on their way from conflict areas, European parliament is also addressing this topic at all possible occasions.

Last week there was a plenary in Strasbourg where the majority of speakers and guest took opportunity to address MEP, during the plenary and during other occasions. The Spanish King Felipe VI called on the EU to treat the current refugee crisis with “generosity, solidarity and responsibility” and also during the “historical meeting” between François Hollande and Angela Merkel, the debate was mostly about refugee crisis. 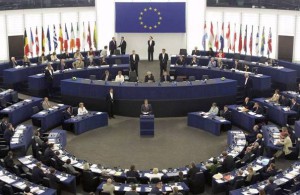 While Mr Hollande advocated an “outgoing Europe”, able to “reaffirm the simple and clear principles of solidarity, responsibility and firmness”, Chancellor of the Federal Republic of Germany Angela Merkel emphasised  “The huge number of refugees is a test of historic proportions. And to allow these people a dignified life in their homelands, is a European and a global challenge”.

This week MEPs also agreed on measures to tackle the refugee crisis during the plenary session on Wednesday in Brussels, while debating also about the European asylum and migration policy. An extra €401.3 million in EU funding to manage the refugee crisis was endorsed by Parliament. In addition the European Union offered Turkey a possible 3 billion euros in aid and the prospect of easier travel visas and “re-energised” talks on joining the bloc in return for its help stemming the flow of migrants to Europe.

The over call from the European Parliament and from the majority of MEPs is that we need more Europe and we need to resist the temptation to fall back into national government action.

A research made among European citizens confirmed that common European approach should be applied to address this issue. Two out of every three Europeans want migrant crisis to be tackled at EU level, regarding the ‘priority financial support’ recently granted to Member States bearing the brunt of migration on their coasts and at their borders, 62% think that it is ‘a good thing’ and 66% of Europeans are in favour of ‘simplifying legal migration procedures’, which they believe would ‘make it possible to fight effectively against illegal migration’.

A lot of words have been said, some acts have been made, but much more should be done, by people and especially by institutions, to address this topic on in EU level and in its core.

Reporter for Out of the Box from the European Parliament