Where are you Erasmus plus ?

The Story of making Europe united through studying, training and working opportunities

Erasmus+ Programme, the new EU programme for Education, Training, Youth and Sports after two years of implementation has been discussed in a public debate, which took place on October 21 in the European Parliament, Brussels. This unique initiative of the Socialists and Democrats Group in the European Parliament as the host turned into a dialogue between several stakeholders for effective implementation of one of the most successful EU Programmes. 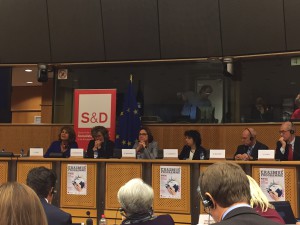 It was the event of the month for the European Civil Society and Youth organizations, as they could give their first impressions about the programme and discuss possible solutions for the challenges. The room was packed with enthusiastic participants as well as 12 representatives of the European Commission, 15 members of the European Parliament and 170 delegates from different stakeholders such as the National Agencies, students, teachers, youth organisations, young athletes, volunteers and other beneficiaries willing to exchange ideas on the successes and failures of Erasmus+.

Out of the Box Programme Director Marko Paunovic was the moderator of this public debate. This article represents the summery of the most important conclusions at the event, for all those who could not follow it directly.

The conference started with the opening speech of Petra Kammerevert, MEP and coordinator of the education and culture committee, speaking of the improvements in Erasmus+ Programme and its importance for EU.

As the programme has proved to be working well, the conference was organized in order to discuss and exchange ideas about aspects which are not working so well in the implementation through an open dialogue. Silvia Costa, MEP and the chair of the Parliament’s education and culture committee mentioned the involvement of 33 countries and more than 3 million beneficiaries of the Erasmus+ programme who have the chance for mobility to study, gain new skills and competences as well as their employment opportunities and other benefits. Regarding the unemployment rate of Erasmus participants it is approximately 23% lower than among young people outside the programme. Moreover, she spoke of the importance of complete recognition of skills and competences of formal and non-formal education that is gained through the Erasmus+ programme and needs to be ensured. Lastly, Ms. Martine Reicherts, the director of Commission’s Culture and Education department (DG EAC), commented on the improvements in new budget for 2014-2020 and the increase in the number of beneficiaries and new opportunities. The potential of the programme to overcome the existing challenges that EU is facing was also discussed, as well as the importance of formal and non-formal education for employment, inclusion and welcoming refugees in our society. Finally, she concluded that some improvements in implementation to overcome IT problems, several pages of forms, complexity of procedures and other challenges commission are already underway.

During the first part of the interactive discussion session of the conference the comparison between the old and new programme was discussed by the participants. The positive aspects mentioned were the increased budget and more opportunities, number of events as well as the number of beneficiaries and compared to giving stronger possibilities for education and cross border mobility. Many stakeholders also emphasized the necessity to use the brand names coming out from the previous programmes, such as ‘Youth in Action’, ‘Grundvig’, ‘Leonardo da Vinci’, to which  the European Commission  confirmed dedication to use those brands in order to promote programme as a whole. 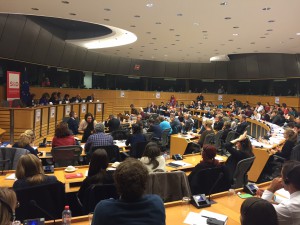 During the second part, main challenges were discussed. The participants stated the programme was not enough user friendly not only in terms of IT but also when it comes to the complexity of the e-forms and transparent information on allocated budgets and procedures as well as evaluation and feedback systems. The decentralization of the programme to national level causes several problems, duplication of similar projects, innovation projects and exchange of good practices at European perspective and especially for fewer opportunities for Brussels based international organizations in particular for Key Action 2. Furthermore, the number of deadlines and complexity of applications as well as lacking the opportunities from the old programme for local and especially new organizations to benefit from the programme such as Key Action 1. The differences within the national agencies and lack of coordination and changes in approaches were some of the main challenges practitioners have faced so far.

The third part of the day was dedicated to improvements for more effective implementation of Erasmus+ Programme. The participants discussed proposals on harmonization and coordination between national agencies regarding both procedures by defining standards and being more transparent as well as more easily accessible information on available budgets per Key Actions. Despite the success of decentralization of KA1, the centralization of management KA2 projects at EACEA level, considering the limited amount of resources, was one of the main proposals. The previously known labels of the programme such as Youth in Action and others, and their extensive use will simplify and increase the usability of such complex and advanced sectorial programme. Having user friendly procedures both in e-forms and contracts will encourage possible beneficiaries to develop new projects and more importantly encourage them to participate in the programme, which is one of the main aims of the EU Programme. In respect to this, the realistic cost rates and flexibility in management costs such as travel rates for beneficiaries from remote areas,possibility to contract more staff and elimination of the % 20 contribution from non-profit organizations in sports activities would make the programme more accessible for beneficiaries with fewer opportunities and specific needs. The proposal for policy priorities of the programme in order to foster coherence of policy making and use of EU finding and the importance of Erasmus+ to overcome challenges on issues such as radicalization, exclusion that others should be taken into account. Finally, as one of the biggest challenges EU facing today, Erasmus+ has to play bigger role in inclusion of refugees and define educational corridor such as adult education, language classes, volunteering opportunities, trainings and many others to integrate them with skills and competences. 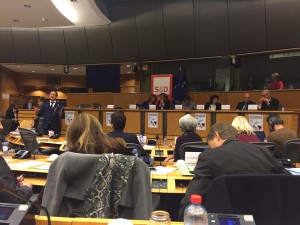 As the final remarks, both EC representatives and MEPs mentioned the importance of open and continuous dialogue on effective implementation of Erasmus+ Programme and the key role on education and employment links that the programme provides. The proposals will provide contribution to implementation report, as well as the mid-term review planned for December 2017. In the end the moderator Marko Paunovic emphasized the importance and success of Erasmus+ in bringing Europe closer together for better future withholding that it clearly needs improvements for more effective implementation.

The audio verson of the  conference is available in English.